Round 7 of the U.S. Championships was a shocker! How else can you describe a round in which the number three in the world and reigning champion gets defeated by the wildcard? Yaroslav Zherebukh produced the surprise of the tournament after a majestic performance against Caruana. In the women’s section, Nazi used her unbeatable charisma to get away with a draw in a very shaky position. We had another intense round.
(The full recap on the official site) 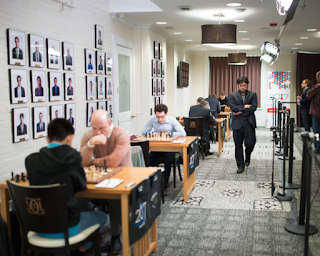 
Zherebukh vs Caruana was a complete stunner! The young student from Saint Louis University, the 2017 wildcard of the open section, opened with 1.e4 and quickly announced his combative intentions. Fabiano chose against another Berlin, entering instead the long variations of the Breyer. As he was playing the second lowest rated player in the event, Fabiano’s strategy was to keep as many pieces on the board as possible, allow his opponent to potentially get a more active position, and try to ultimately maneuver and outplay Yaro in a long game. 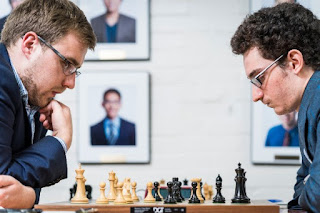 In general, this strategy is the right approach, but Yaro was not going to get phased by any of it; he soon started outplaying his much more experienced opponent. Fabiano started erring with 23…Nh7?! which was a move that allowed Yaro to gain speed on the kingside and impose his will after a well-timed 26.f4! Slowly but surely, black’s position got worse and worse with every move. Yaro could have ended the game quicker if he would have found 32.Nf5! Instead of that, he decided to keep the queens on the board and suffocate his opponent just like a boa constrictor would finish his prey. 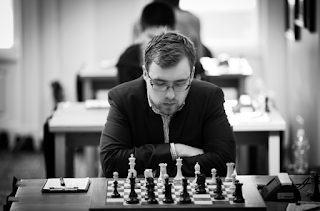 With this win, Yaro catches So in the lead and dynamites the end of this event. It is too early to call, but a potential victory for Yaro would arguably be one of the biggest surprises in modern chess history. Only time will tell!

Xiong vs Shabalov was a textbook showcase of how important opening preparation is, and how good Shabalov is at it. 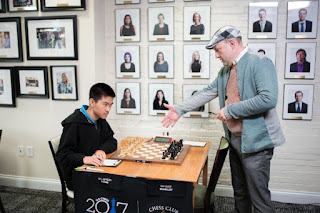 The game followed an old line of the 3.Nc3 Caro Kann, an opening that has experienced a revival in the last few years due to the insurgence of engines and other analysis tools. Shabalov’s opening knowledge is incredibly vast, and by the time his preparation ended, his position was completely winning and his opponent was down to his last minutes on the clock.

The position was so hopeless that despite Jeffery’s attempts at complicating matters, Shabalov easily refuted any try and finished the game with precision at move 26! A huge win for Shabalov and a disappointing result for Jeffery, who seems exhausted after his fiery start in which he easily defended the black side of the board against Caruana & Nakamura. 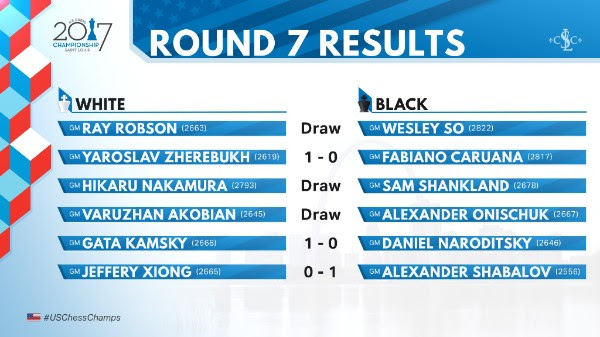 Paikidze vs Sharevich was the biggest clash of the round in the women’s section. After witnessing an unprecedented two rounds without a single draw being registered, all eyes were on the ladies to see if they could sustain such an aggressive tempo. They surely didn’t disappoint! Nazi remained faithful to her strategy; she chose to open with 1.Nf3 and tried to take her opponent out of any theoretical realms as soon as possible. 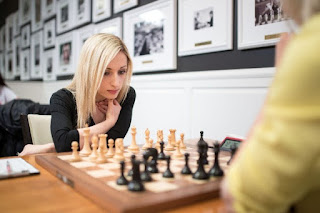 Unfortunately for her, today her strategy did not yield the best results as Anna was well prepared and obtained a quick advantage out of the opening. Nazi seemed to struggle to find the right plan and her position quickly deteriorated.
Nazi’s experience came into play when her well timed draw offer right before the time control took Anna by surprise and she accepted the peaceful result in a much better position. Nazi escapes unscathed after a difficult game and maintains her #1 position on the charts.

Nguyen vs Feng. Maggie Feng has been the pleasant surprise of the event as her enterprising and fearless style attracted many fans along the way. The game followed the strategic routes of the Stonewall Dutch, and it was Maggie that timed her attack better with 16…g5! grabbing the initiative in the process. Her pressure was too much for Emily to handle and she quickly started playing inaccurately. Maggie’s precision and composure seemed to belong to a much more experienced player, not a rookie playing on the biggest stage of her life. 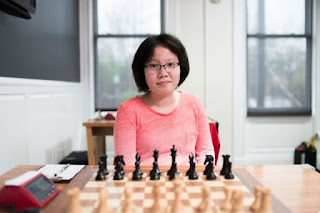 Maggie calmly collected all her opponent’s weak pawns, transitioned into a winning endgame, and converted with ease. A masterclass by the newcomer who now trails the leader by half a point. Tomorrow’s clash against Nazi can’t come at a better time, as she will surely give her all in her attempt to vanquish the reigning champion! 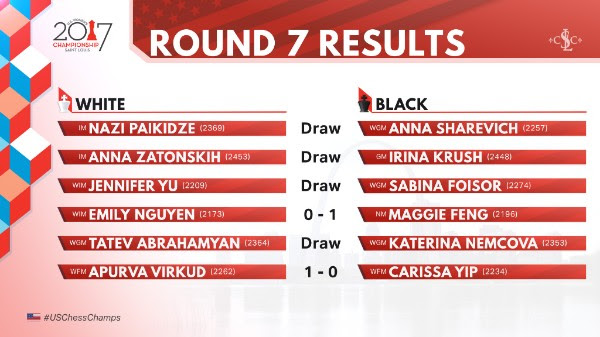