The 2017 U.S. Championships are heading into their last rounds, and the battle for the top position is heating up more each day. In the open division, Wesley So is still leading, but another competitor has emerged on the horizon. Var Akobian dropped the hammer on yesterday’s hero, Yaro Zherebukh, and leap frogged him after a sound strategic victory. He is now joint leader alongside So and will go into the championship rounds as one of the favorites to win it all. Caruana was quick to recover after his painful loss and blew Daniel Naroditsky off the board after a powerful show of dynamic chess. In the women’s section, Nazi drew the wildcard Maggie Feng and allowed Sabina Foisor to catch her at the top of the table.
(The full recap on the official site) 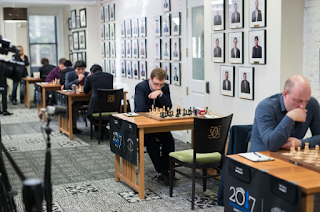 
Caruana vs Naroditsky was one of those games which reminds you just how strong the number three (4 in the live rating list) is. Fabiano opened with 1.e4 and the players followed one of the most topical lines of the French. Unfortunately for Daniel, he seemed to have forgotten the theory as early as move nine when his 9…b6 could be considered at least a bit suspicious. 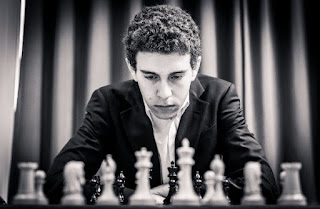 White immediately blasted open the center with 10.c4! and black soon found himself under heavy dynamic pressure. Daniel could have defended better, however, Fabiano’s victory never seemed to be in danger.
He is now back within striking distance of the leader and will face Akobian in tomorrow’s clash of the day.
Zherebukh vs Akobian is an example of how difficult some strategical concepts are, even for top level players such as Yaroslav. The players entered a rare variation of the French Tarrasch and there was never a doubt on who knew it better. Akobian was a man with a plan and his enticing 14…0-0! was the one temptation Yaro couldn’t refuse. 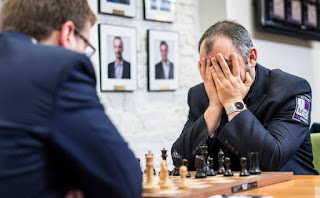 15.Bxf6? was a serious misjudgment which allowed black to gain complete control over the game due to his bishop pair and better placed pieces. Akobian increased his advantage with masterful precision and forced Yaro’s capitulation after the killer 28.Rd2! It was an impressive win for Akobian who is now in a good spot heading into the final decisive rounds! 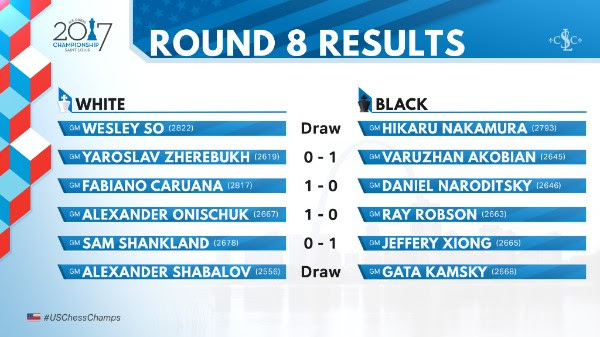 Krush vs Virkud signaled Irina’s comeback! The 7 time champion came very well prepared and quickly imposed her dominant style. But the nature of the position was quite volatile, and white’s imprecise moves allowed black to find equality. There were still plenty of pieces on the board and Irina’s versatility aided her in making better moves and she slowly outplayed her opponent. Virkud’s 32…Qh4? was the icing on the cake as Irina swiftly punished her opponent’s reckless play. 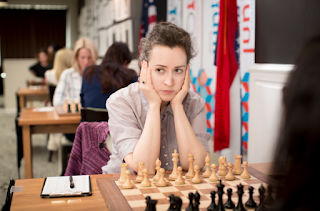 With this win, the seven time U.S. Women’s champion cuts into Nazi’s lead and stands only half a point behind her. She will face Yip tomorrow in what will surely be a fierce battle between the most and least experienced players in the field. Foisor vs Nguyen was a show of force by Foisor, who seems to be working extremely hard during her pre-game preparation, as she always has magnificent positions after the theoretical battle ends. By move 17, Sabina was in full control and was heading toward another crushing defeat; unfortunately for her, she made the wrong choice with 20.d6?! when she should have ended the game with 20.f4!, a move that would have been much more devastating than the game continuation. 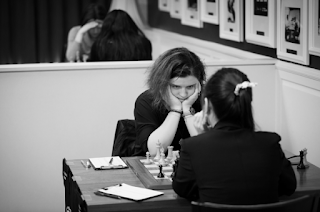 Emily proved to be extremely resilient and at one point it seemed that the outcome of the game was not set in stone. Despite her missteps, Sabina kept her cool and managed to convert her advantage. With this win, Sabina joins Nazi in the lead and will face her tomorrow in what will surely be the clash of the day in the women’s division. 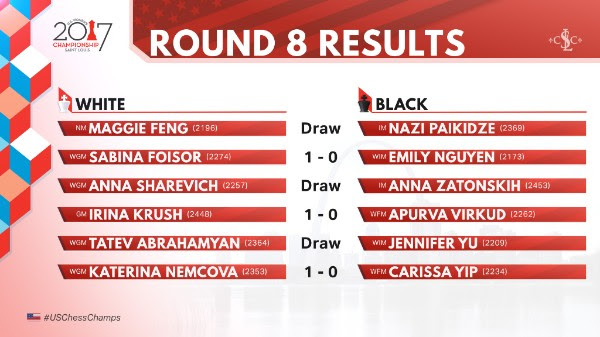