Magnus Carlsen is the winner of the 2nd Gashimov Memorial - Shamkir Chess 2015 with 7/9 points. Congratulations!

Final round of Gashimov Memorial 2015: LIVE!

SAINT LOUIS (April 24, 2015) – There is a new, gold standard for international chess competition, providing more opportunities for the world’s best chess players to compete on a grand stage.

The world’s most prestigious, international chess events are combining efforts to establish a gold standard for the inaugural Grand Chess Tour, an annual competitive circuit for ten of the world’s top grandmasters. The announcement was made today at a press conference held at the Chess Club and Scholastic Center of Saint Louis.

The Grand Chess Tour is an affiliation between the Chess Club and Scholastic Center of Saint Louis (Sinquefield Cup), Tower AS (Norway Chess) and Chess Promotions Ltd. (London Chess Classic), combining the organizational efforts of three elite events into one unified competitive structure. The partnership aims to raise worldwide awareness for each prestigious tournament, as well as for the tour.

The inaugural 2015 Tour will kick off in June as a three-event cycle, beginning with Norway Chess 2015, followed by the Sinquefield Cup in August/September, and finishing with the London Chess Classic in 2015.


Based on FIDE's January 2015 rating list, the Grand Chess Tour invited the world’s top-ten international grandmasters, eight of whom agreed to appear in all three international events. A ninth grandmaster, who will also play the entire tour, will be added at a later date. The tenth and final grandmaster will be selected as a wildcard by each organizing host.

The participating players are:

“The Grand Chess Tour was created with just one goal in mind: Demonstrating the highest level of organization for the world’s best players,” said Tony Rich, Executive Director of the CCSCSL. “Featuring the world’s strongest chess professionals fighting for massive prize funds, along with a full spectator experience led by world-class commentary, this circuit sets forth an internationally coordinated effort that casts a shining spotlight on global chess competition.”

“It’s an honor to be among the giants of chess organizers,” said Joran Aulin-Jansson with Tower AS (Norway Chess). “Having the world’s best chess players in one circuit is a great way to fuel excitement for the future of chess.”

“The London Chess Classic is delighted to be part of this new venture which we feel sure will greatly add to the public interest in top flight chess,” said Malcom Pein, Director London Chess Classic.  “We look forward to the Grand Chess Tour climaxing in London and to further tournaments joining the GCT in coming years."

Participating tournaments are identified as the gold standard for international event organization, setting the model for player conditions, prize funds and spectator experience. Each of the events will cater to live audiences, as well as offer streaming broadcasts complete with grandmaster commentary.

Recognizing the cognitive and behavioral benefits of chess, the Chess Club and Scholastic Center is committed to supporting those chess programs that already exist in area schools while encouraging the development of new in-school and after-school programs. For more information, visit www.saintlouischessclub.org.

Email ThisBlogThis!Share to TwitterShare to FacebookShare to Pinterest
Labels: 2015, chess, Saint Louis, US 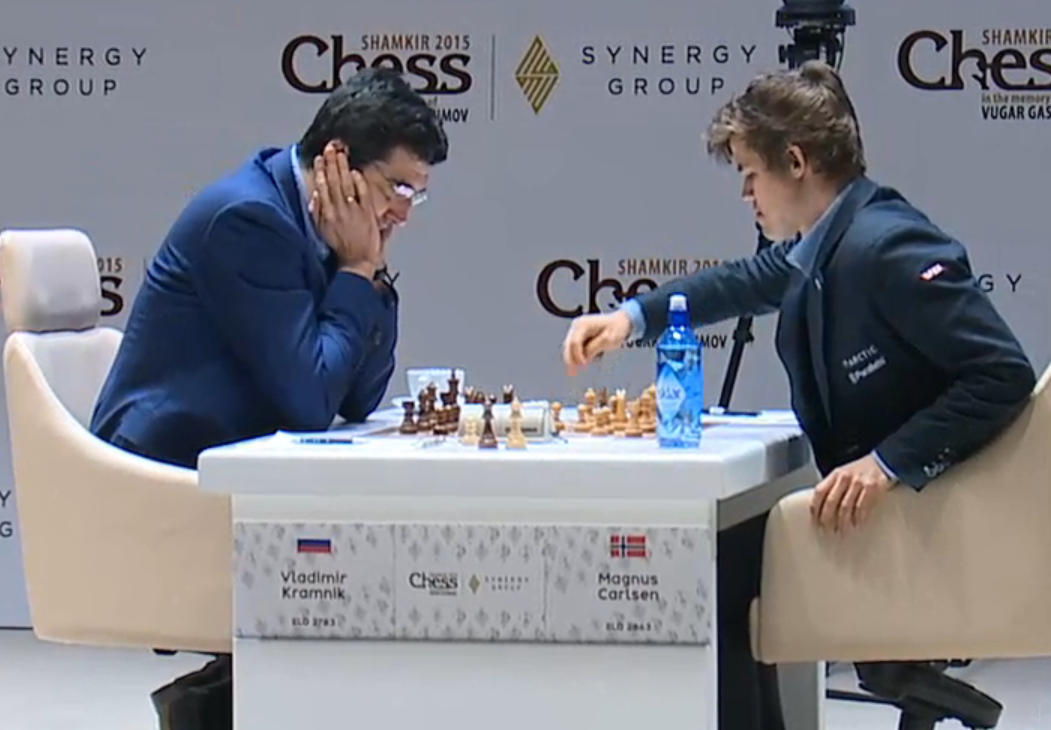 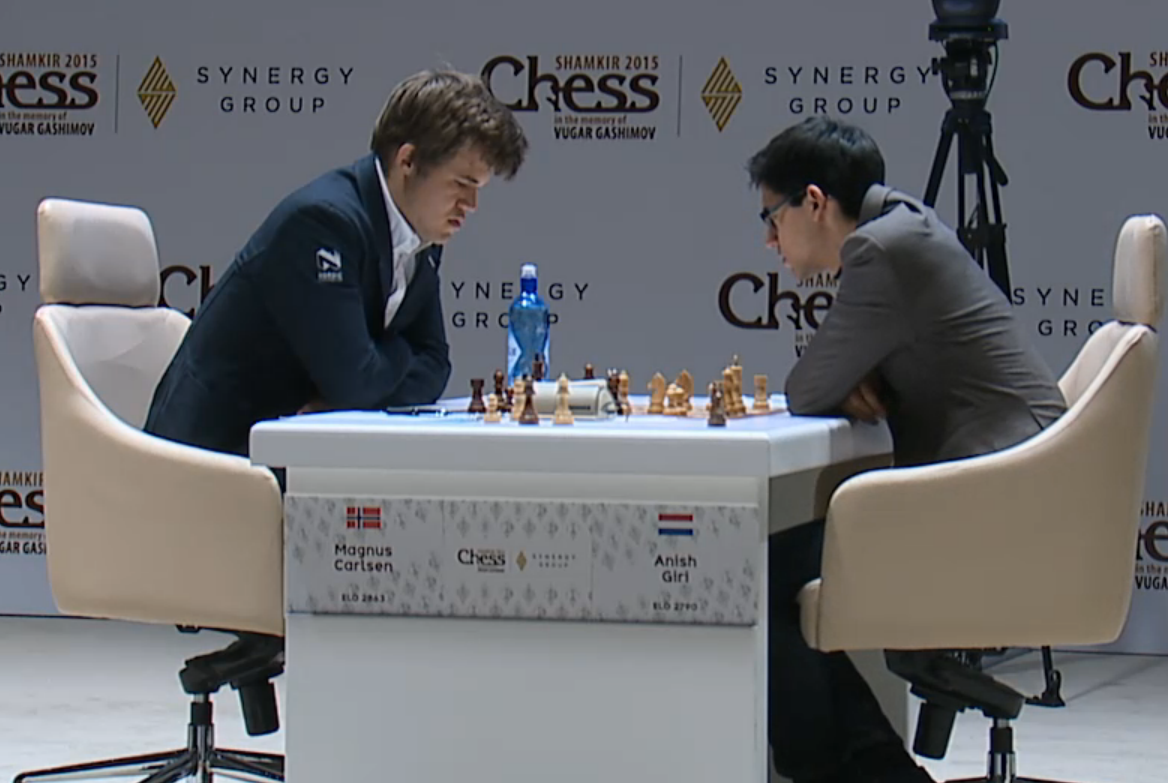 The unique style of Vugar Gashimov: selected games with annotations

In the free day during the 2nd Gashimov Memorial Shamkir Chess 2015, lets see a selection of games which demonstrate the exquisite style of Vugar Gashimov, for which he was considered to be one of the most talented chess players of recent times.

Selection made by GM Alexander Delchev.

GM Alexander Delchev: Gashimov was a genius - he had an amazing positional understanding and foresight. It is quite sad that he died so young and at his peak. His play was dangerous - he could have successfully challenged Anand, Caruana, Carlsen, Topalov, Aronian, Nakamura...


A game from World Cup 2009 against one of the rising stars Fabiano Caruana (commentary: GM Alexander Delchev)

The sole leader So against Anand in round 5 of Gashimov Memorial 2015: live GM commentary 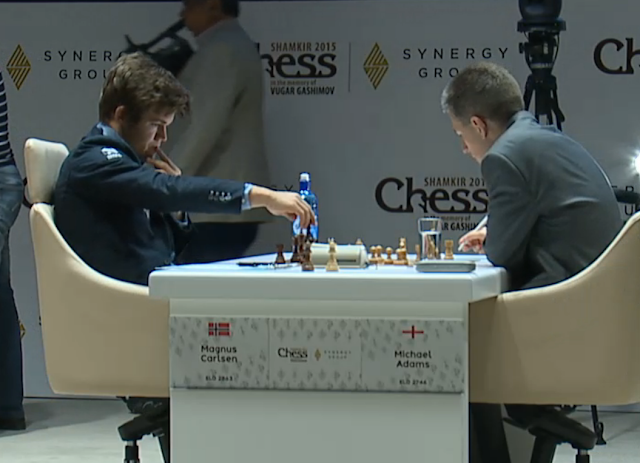 Anand meets Carlsen in the first round of Gashimov Memorial 2015

Preparation works of Shamkir Chess 2015 super tournament in memory of Vugar Gashimov, which is organized with sponsorship of Synergy Group in between of April 16-26, have already been completed.

The event is taking place at the Heydar Aliyev Center in Shamkir. The tournament will be broadcast live on www.shamkirchess.az or visitors will be able to watch the games at the Center. All games will be commented in Azerbaijani, Russian and English languages.

"Synergy Group" always takes professional and consistent steps forward for a sustainable future and contributes to the development of the society.

Nakamura and Krush US and US Women Chess Champions

Grandmasters Hikaru Nakamura and Irina Krush have earned the 2015 U.S. and U.S. Women's Chess Championships, recording a career total of 11 national titles between the two.

GM Hikaru Nakamura and GM Irina Krush both sealed the deal in Sunday's final round of the U.S. Chess Championships, enshrining their names as 2015's king and queen of American chess.

With a half-point lead over GM Ray Robson entering Sunday, Nakamura silenced his last threat to the U.S. title by dropping 2006 champion GM Alexander Onischuk in a deceptively tricky endgame.

Meanwhile, in the Women's Championship, Krush pushed a draw against WGM Katerina Nemcova to capture an outstanding seventh title -- and fourth consecutive.
Posted at 11:17 AM

Email ThisBlogThis!Share to TwitterShare to FacebookShare to Pinterest
Labels: US, winners

Wesley So forfeited in round 9

Wesley So was forfeited in round 9 after being reported by his opponent Akobian for illegally making notes during the game. According to the Chief arbiter Tony Rich, So has been warned earlier regarding the note taking, and So's notes were not chess-related but contained "general encouragement and advice to himself".

Email ThisBlogThis!Share to TwitterShare to FacebookShare to Pinterest
Labels: US Championships, Wesley So

Email ThisBlogThis!Share to TwitterShare to FacebookShare to Pinterest
Labels: 2015, live chess, Saint Louis, US, US Championships

The 17th Dubai Open Chess Tournament will run from April 5-15 at the Dubai Chess and Culture Club. Ibrahim Al Bannai, Chairman of Dubai Chess and Culture Club and head of the organising committee, announced during a press conference held today (31 March 2015) at the club that players from at least 43 countries will be competing for the prestigious Sheikh Rashid Bin Hamdan Al Maktoum Cup.

India accounts for the biggest foreign delegation with 36 players, followed by Azerbaijan, Russia and Armenia.

Indian Women Grand Master Karavade Eesha is the highest rated among women participants with a rating of 2398. Around 20 top-rated women from countries such as Greece, Azerbaijan, Russia, Turkey, Ukraine, Jordan and Egypt, which is represented by WGM Mona Khaled, have already registered. The UAE contingent is led by Woman International Master Noman Ali Al, the Arab Under-20 champion, Women International Master Kholoud Al-Zarooni and Bashaer Khalil, a bronze medallist at the Arab Under-16 championship.

Ian Nepomniachtchi won both in Classic and Blitz at Aeroflot 2015

Congratulations to Ian Nepomniachtchi for winning both the Classic and the Blitz tournament at Aeroflot Chess Open!

Watch game 2 of the final between Natalia Pogonina and Mariya Muzychuk today with live commentary by GM Alexander Delchev!