If the Open section gave us the biggest surprises in round nine, the show in round ten was stolen by the women, who produced two decisive results in the biggest clashes of the round. Nazi Paikidze dodged a huge bullet when she defeated Tatev Abrahamyan after being completely lost once the opening ended. In the other important clash, Sabina Foisor managed to climb her way back up in a worse middle game and outplay Zatonskih after the latter once again fell into a challenging time trouble situation. The open section’s leaderboard is crowding at the top; Akobian and So drew their games while Onischuk took advantage of the state of affairs and joined the leaders after a beautiful endgame grind against the struggling Xiong. We are set for a dream championship finale!
(The full recap on the official site) 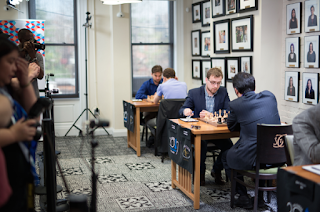 
So vs Kamsky was Wesley’s last chance to score as white in this tournament and the round was definitely something to look forward to. The game started peaceful with white choosing to enter the Exchange Slav, an opening that is widely considered to be drawish. Nevertheless, the opening has experienced a resurgence in the last couple of years and has been tried at the top with moderate success.. 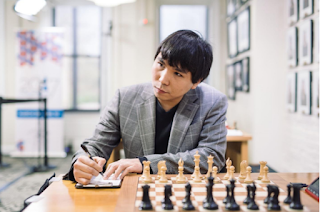 Kamsky chose to play a less theoretical line opting for an early e6, leaving the light squared bishop blocked on c8. The line is considered to give white the advantage, but he was quick to prove it wrong as he equalized with ease before move 20. To some, it even looked as Wesley might be in trouble, but that’s when the co-leader showed his champion metal and pulled the breaks without allowing his opponent to get any further pressure. 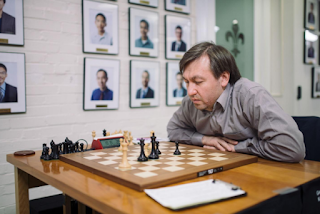 The game was a solid draw that placed Wesley in pole position to win the tournament. He is facing Naroditsky tomorrow in what will surely be an unforgettable thriller.
Onischuk vs Xiong. Onischuk is not the most active player in the American circuit, but when he plays, his technical skills are exceptionally sharp. Jeffery chose the Grunfeld, an opening that bears a piercing trademark. Onischuk’s experience allowed him to outwit his younger opponent and stir the game into a slightly better endgame, which is surely something that Jeffery was trying to avoid at all costs.
Lacking patience, Jeffery tried to over simplify with 16…e5 which was all Onischuk needed to force his opponent on the defense. Slowly but surely, white started maximizing his bishop pair, and it was only a matter of time before black had to concede material. 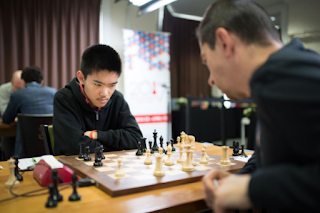 Onischuk’s textbook precision allowed him to convert with ease and join the leaders at the top of the standings. 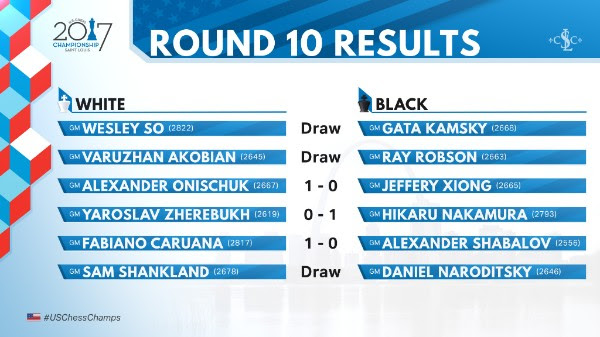 Abrahamyan vs Paikidze was the most anticipated encounter in the ladies division, as it was the game between the two heroines of last year. These ladies gave us a dramatic end to the 2016 U.S. Championship story, and despite their friendly relationship outside of the arena, once they shake hands at the start of the match all gloves are off. 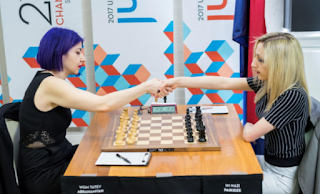 Nazi’s opening choice once again surprised the pundits as she chose the Pirc, an opening that is quite rare at top level. Tatev played healthy chess and quickly obtained a winning position, but it was then when her nerves started becoming wobbly.
Tatev began making irrational decisions (27.Nxg5?!, 29.h4??) and allowed Nazi to take control of the game. With her clock ticking down, Tatev was unable to find her way and blundered the game under pressure.
Foisor vs Zatonskih was the second big matchup of the day. The game was between the revelation of the tournament, Sabina Foisor, and the four time champion, Anna Zatonskih. 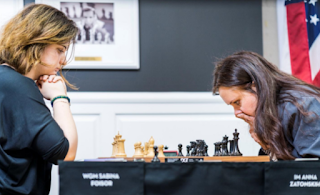 Sabina has been showing top opening preparation throughout the event, but today she fell into a difficult position early. Anna seemed to be in control but once again her time trouble addiction kicked in and she fell behind on the clock. Anna could have gotten a decisive advantage with 22…Qf6! But instead, she ventured with 26…Nd3?! and quickly fell to Sabina’s dazzling tactics. It was an immense win for Sabina who is now sharing the lead with Nazi going into the championship round. Tomorrow we will surely have fire on the board! 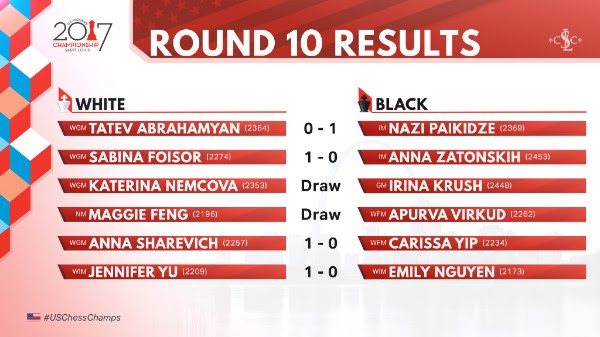