It is a well-known fact in the chess world, every player wants to go into the free day on a high note. This usually translates into sharp games that lead to decisive results. That was my prediction at the beginning of the round and the players did not disappoint. In the open section, half of the games were decisive, while in the women’s section not a single game was drawn. Today’s explosive round kept us glued to the action, the best possible way to send us into the free day and second part of the tournament!
(The full recap on the official site) 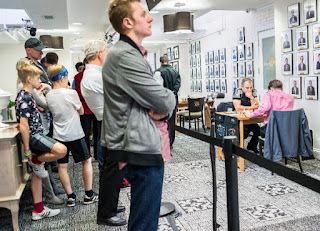 Onischuk vs Caruana was the last game to end, and arguably the most interesting battle of the round. Fabiano’s intent was clear early on when he decided to play the KID, an opening he has not been experiencing with almost at all. Trailing by a full point behind So, he was fundamentally forced to try and paint a dynamic portrait early. The pawn structure was the dictating factor throughout the game and it looked at some point as if Onischuk could potentially upset the reigning champion and cut his title hopes short.

Unfortunately for Alexander, Fabiano’s vibrant play coupled with the mutual time trouble, caused the veteran to slip and allow his opponent to obtain a solid endgame advantage. Alexander tenaciously defended but failed to fully annihilate Fabiano’s play, and if the latter would have played 66…d5! this game could have ended with a very different result. 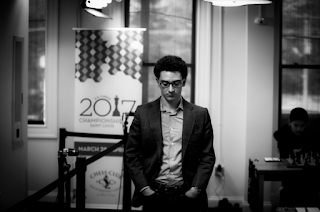 Fabiano lacked precision when it mattered the most and will now be forced to cut a 1 point deficit after the free day if he wants to retain his title. Akobian vs Shankland was a strategic masterpiece by Akobian, almost. The game was a Semi-Slav that quickly turned into a nightmare for black after the careless 17…Ba6?, which allowed 18.Ne5 and forced black to give up his only strategic trump, the bishop pair. Akobian developed his advantage successfully and could have ended the game multiple times; he even mentioned during his interview that he believed Sam will resign at any moment. 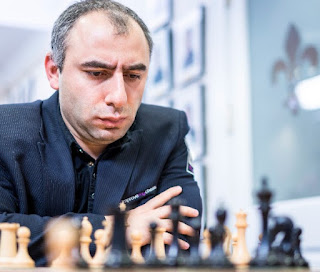 Unfortunately for him, imprecisions started creeping in and with 3 moves before his resignation Shankland could have saved the game with the precise 55…Kg5!.

The shocker didn’t even pass through either of the player’s minds, as mentioned during their postgame, and Akobian left home with the full point. A great result for him, as he is now standing on +1 and will face So after the free day! 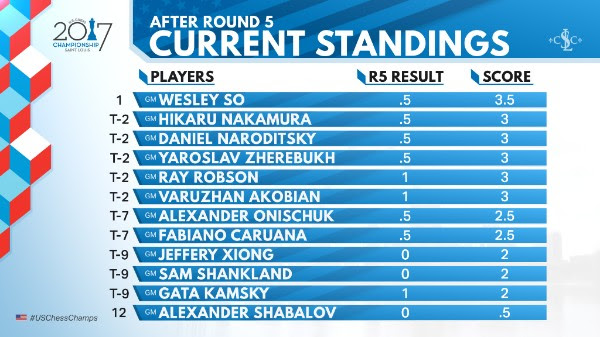 Paikidze vs Yip was a great example of why Nazi is the reigning champion. From opening preparation to endgame mastery, Nazi played a brilliant game aimed at targeting her opponent’s weaknesses from start to finish. 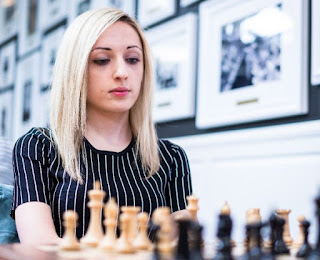 The game followed a known variation of the Catalan, in which white gets a slightly better endgame. I know how unpleasant it is to defend as black because I also had to do it against GM Ramirez, albeit in a rapid game. Nazi slowly suffocated her opponent with good moves and tactically executed her with the powerful 19.Na5!! obtaining a decisive advantage very early in the game. Yip was never able to create any counterplay and Nazi ended the game with Swiss like precision. After her painful loss in round 3, Nazi regained her mojo and is now leading the tournament alongside Zatonskih and Krush. The three ladies are the only ones from the field that have ever won a national title; they share among each other 12 national titles!
Zatonskih vs Virkud was another straightforward affair. Virkud equalized with ease after the opening but failed to understand the middle game complications and blundered early. Her exchange sacrifice (19…Qxa2?) was a misjudgment which swiftly led to her demise. Anna played with poise and precision and never allowed her young opponent to get back into the game. 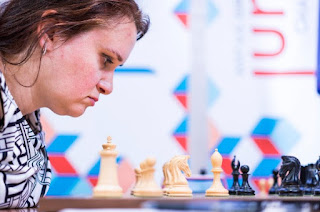 Virkud resigned before move 30 and Anna joins the three way tie at the top of the table. The second part of the event will be fire! 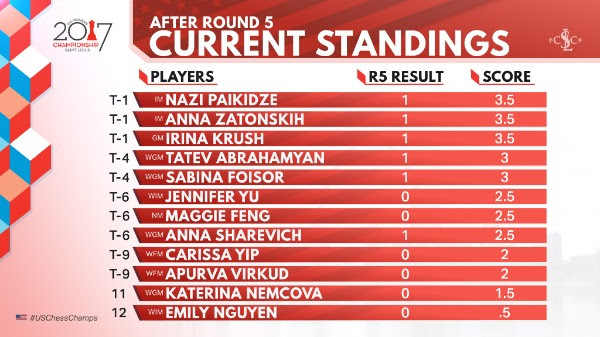