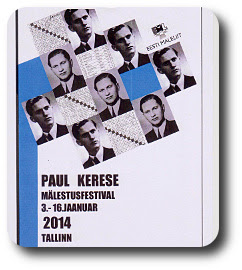 Today was the first day of the Paul Keres Memorial Festival 2014, organised by the Estonian Chess Federation in Tallinn, 10-16th January 2014.

Today is also the start of the Tata Steel Tournament and it is the 50th anniversary since the famous Estonian won the tournament (back then called Hoogovens, Bevenwijk) in 1964.

Paul Keres was among the world's top players from the mid-1930s to the mid-1960s. He missed the chance to compete at a world championship match on five occasions. The first time the title match was cancelled due to World War II and the occupation of Estonia by the Soviet union, and after the war Keres was runner-up in the Candidates' Tournament on four consecutive occasions. However, he was the only player in chess history to defeat nine undisputed world champions.

Because of this, Keres is often considered the strongest player never to become world champion, and got nicknames such as "Paul the Second", "The Eternal Second" and "The Crown Prince of Chess". 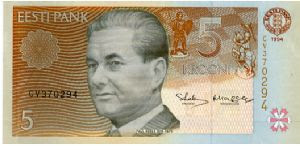 Paul Keres is the only chess player whose portrait appeared on a banknote - the 5 kroons Estonian banknote in the 1990's until the country joined the Euro-zone.

The Paul Keres Memorial celebrates the birth anniversary of Grandmaster Paul Keres who was elected the Estonian Sportsman of the 20th century. Tournaments are traditionally held in January every other year in Tallin (Estonia). Another Keres Memorial tournament is organised in Vancouver (Canada), where Paul Keres played his last tournament in 1975 just before his death from a heart attack.

The tournament is broadcast live at ChessBomb with computer analysis. Regular updates are also posted on Twitter and Facebook.