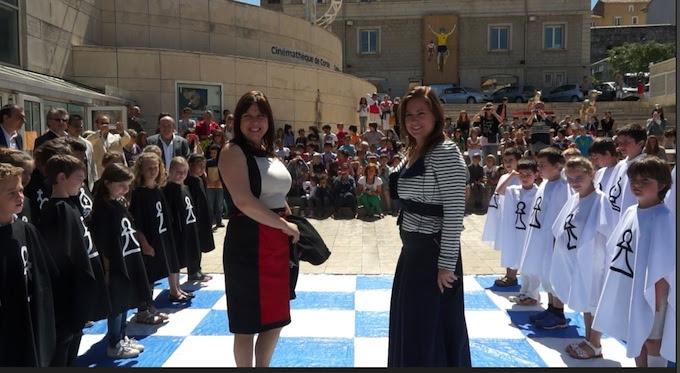 Despite her retirement from top-level competitions last summer, Judit Polgar has remained quite active and she will be in France on March 22 in order to play a simultaneous exhibition against French students for the 22nd edition of the EY Chess Trophy.

This competition will take place on March 21 and 22 in the EY headquarters in the Tour First in La Defense (3 km from Paris). It consists of a rapid (15’+3”) tournament by team of 4 players from the same university ended by a simultaneous exhibition against a grandmaster.

Around 30 teams are expected, and the 8 first teams of the tournament will earn the right to play against Judit Polgar: each team has 1h30 to finish the game, and the members of a team can discuss before playing a move. Since the creation of the tournament, none of the invited grandmaster ever managed to score a 8-0 against the students, even if some of them were quite close: Kramnik (2005, +7, =1) , Aronian (2012, +7, -1), Vachier-Lagrave (2013, +7, -1). As regards to Judit challenge,  the average level of her opponents will be considerably higher in comparison with the previous editions (around ten titled players expected, including a grand master). She is fully aware of that and she will come prepared to show that she remains on top despite her retirement from competitions.

The games of the tournament and the simultaneous exhibition will be broadcast live here.