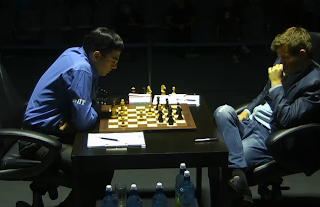 
Our aim will be to provide LIVE commentary on most of the games between Anand and Carlsen in their fight for the title of World Champion. Starting now, with a live commentary provided by our distinguished commentator GM Alexander Delchev.

Round 1: Anand - Carlsen
In the last match the intentions of both players were quite clear. Carlsen was trying to avoid the heavy theoretical debacle, opting for a more middlegame oriented openings like 1. Nf3 2. g3 with white and with black he defended against e4 with ultrasolid Berlin. On the other side, Anand was desperately trying to catch Carlsen on an early clash in sharp lines or at least deeply worked lines with unclear consequences. That's why the opening chosen by Carlsen came as a little surprise. Grunfeld was the main choice of previous contender for the throne - Gelfand, so it was for sure thoroughly studied by Anand's team. On the other side, Gelfand was quite successful with it, which probably is the main reason for choosing this dynamic and always fresh with ideas opening system... See more