Final round of Zurich Chess Challenge 2014 finished with a draw between the current World Champion Magnus Carlsen and the previous one Viswanathan Anand after 40 moves; draw between Nakamura and Gelfand in 21 moves (followed by a rapid game); and the win of Caruana over Aronian. 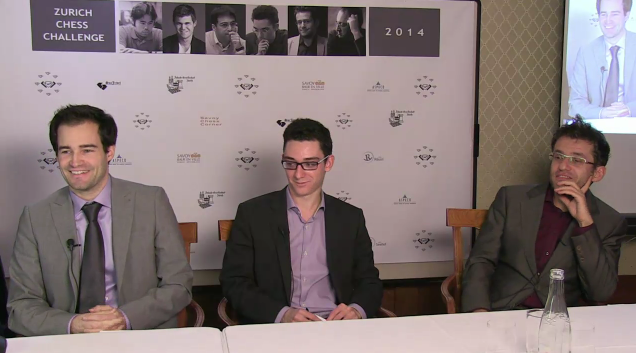 Aronian in good mood despite the loss


Pelletier asks Aronian: Have you ever lost a game in the Marshall?
Levon Aronian: I don't remember losing but this was bound to happen.
Pelletier: The more you play, the more likely it becomes...

Tomorrow, 3rd February, there will be a 5-round rapid tournament from 13:00 CET.

Some reviews:
Commentary videos
The Week in Chess
ChessBase
ChessVibes

Pairings for the rapid tournament