The Sofia Festival from the ChessBomb Tour 2017

ChessBomb Tour begun on 6th of May 2017. The first festival from the Chessbomb Tour 2017 was held in Sofia. The organization of a chain of chess tournaments, outside, in the central gardens of Sofia, Plovdiv, Varna and Burgas, is an unique initiative for Bulgaria. The main sponsor of the event was the ChessBomb portal. The goal of the ChessBomb community is the popularization of the chess game by broadcasting online chess events with real-time computer engine analysis, by organizing tournaments, by encouraging the in-school and after-school chess programs. The ChessBomb team (the chess portal Chessbomb.com and the chess club ChessBomb - Plovdiv) is striving to update and modernize the chess tournament standards. After returning the indoor chess tournaments to Bulgaria's chess calendar with Magura 2016, ChessBomb's enthusiastic team now brought the Bulgarian chess out into a summer chess tour. 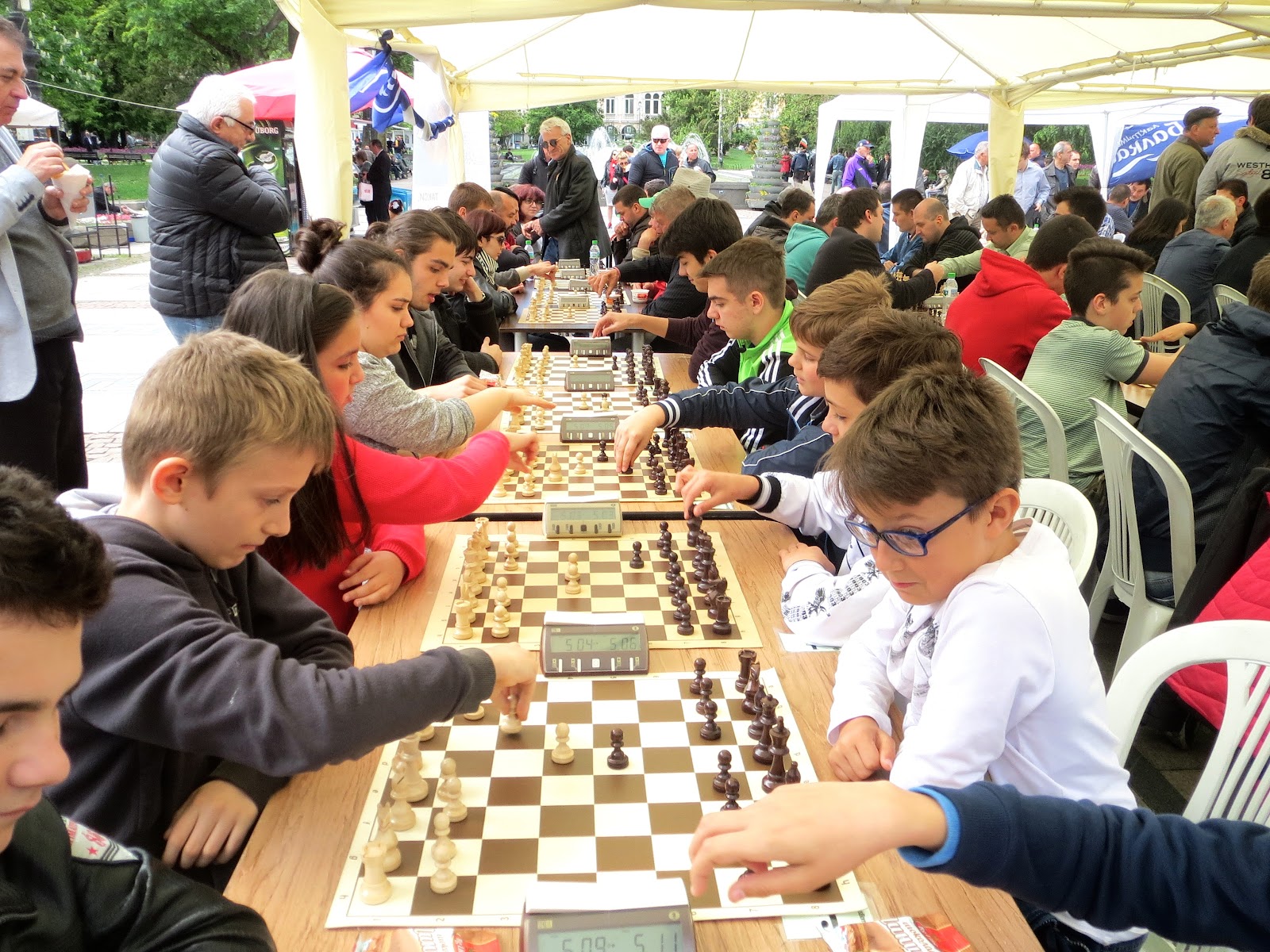 It was a festive day - the day of saint George, a fest of the Bulgarian Army. After the official parade of the Bulgarian army a spectacular chess and cultural show was held in the garden in front of the National Theatre Ivan Vazov. Some moments of the event were shown on video screens and the play was accompanied by the sounds of a classical music. 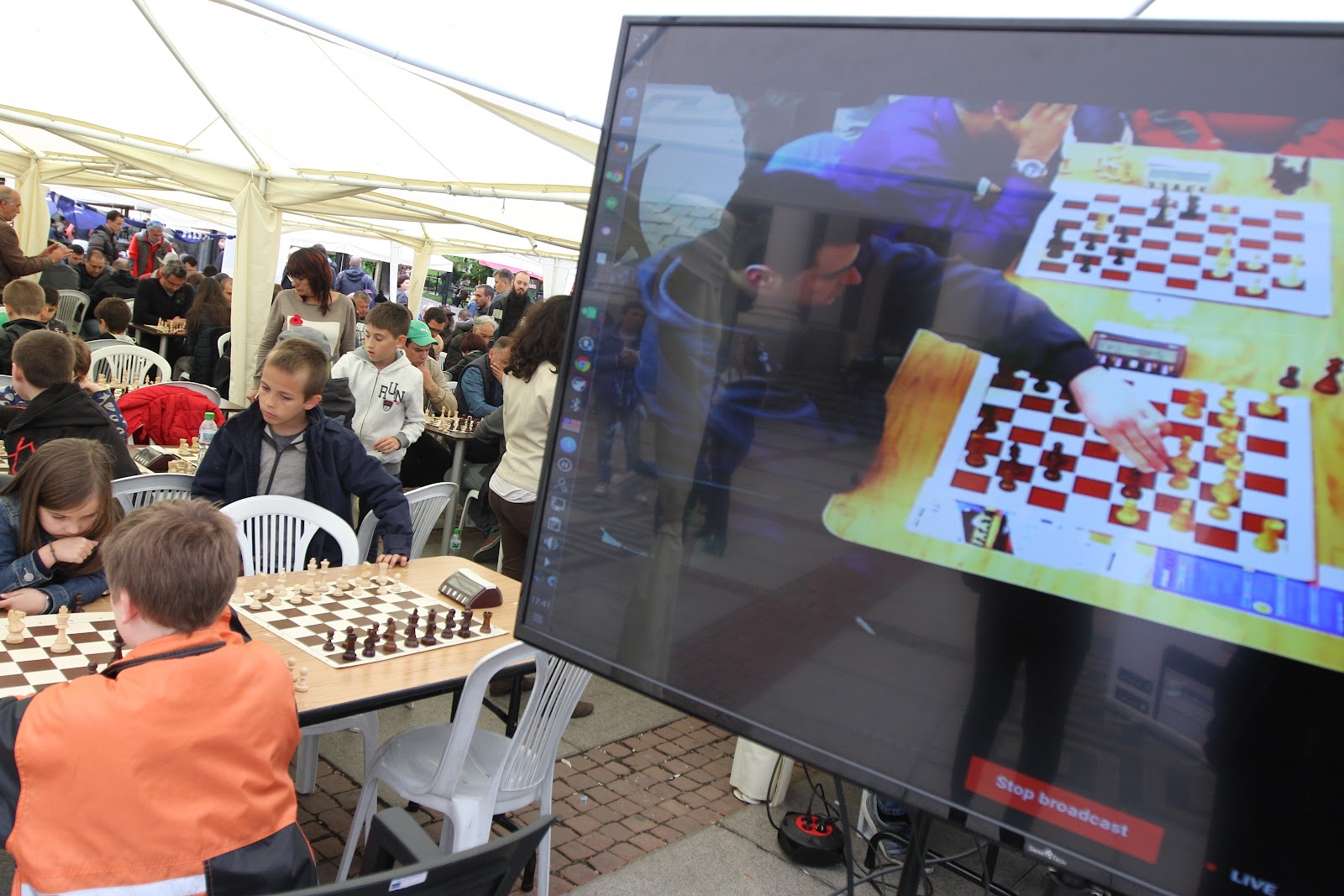 The tournament was opened by the youngest Bulgarian deputy Teodora Halacheva. 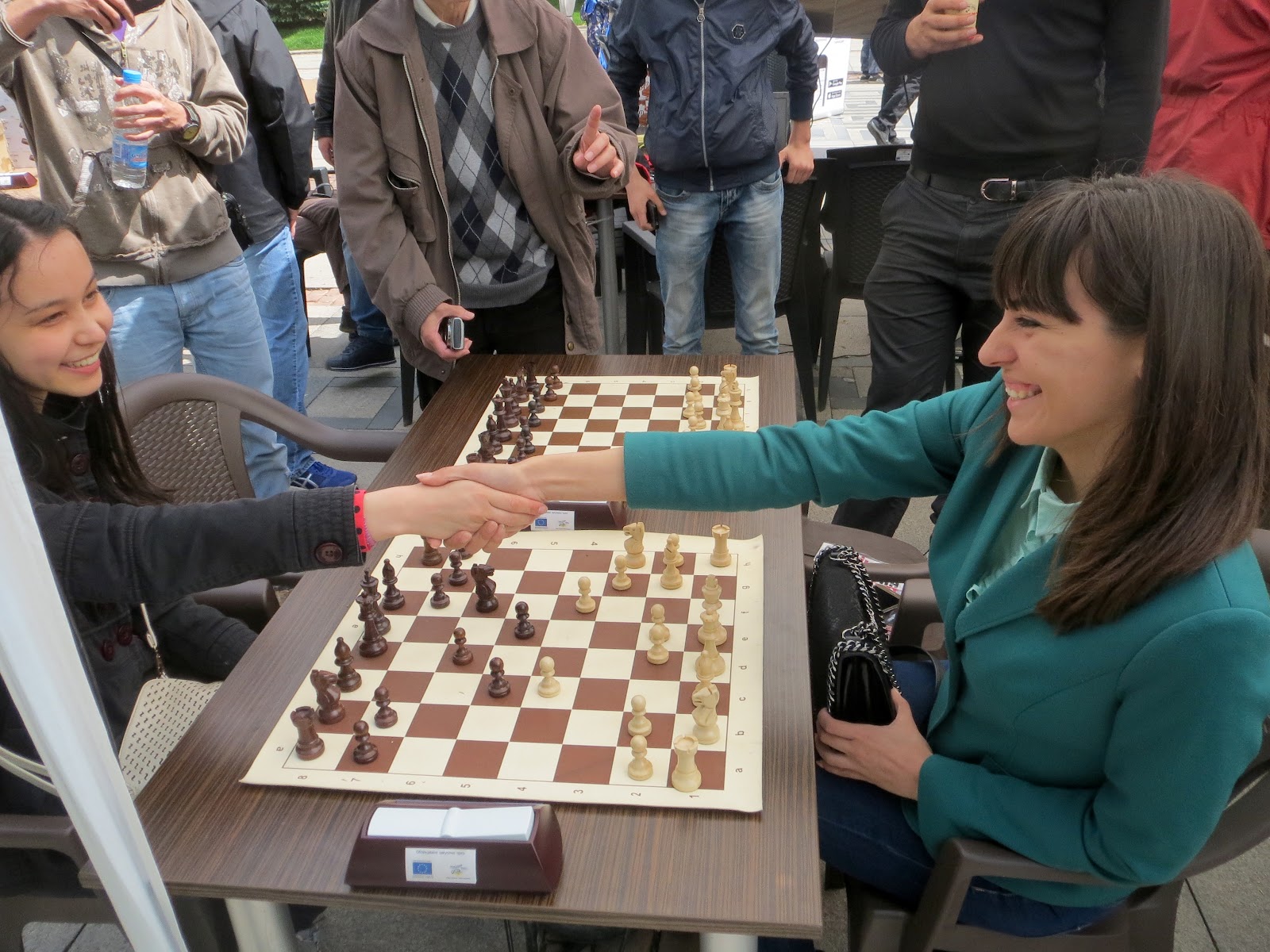 Joyful emotions brought the presence of the chess champion GM Antoaneta Stefanova. She became the "face" of the ChessBomb chain and patiently posed for pictures with all her fans, bringing unforgettable joy to many children and chess lovers. 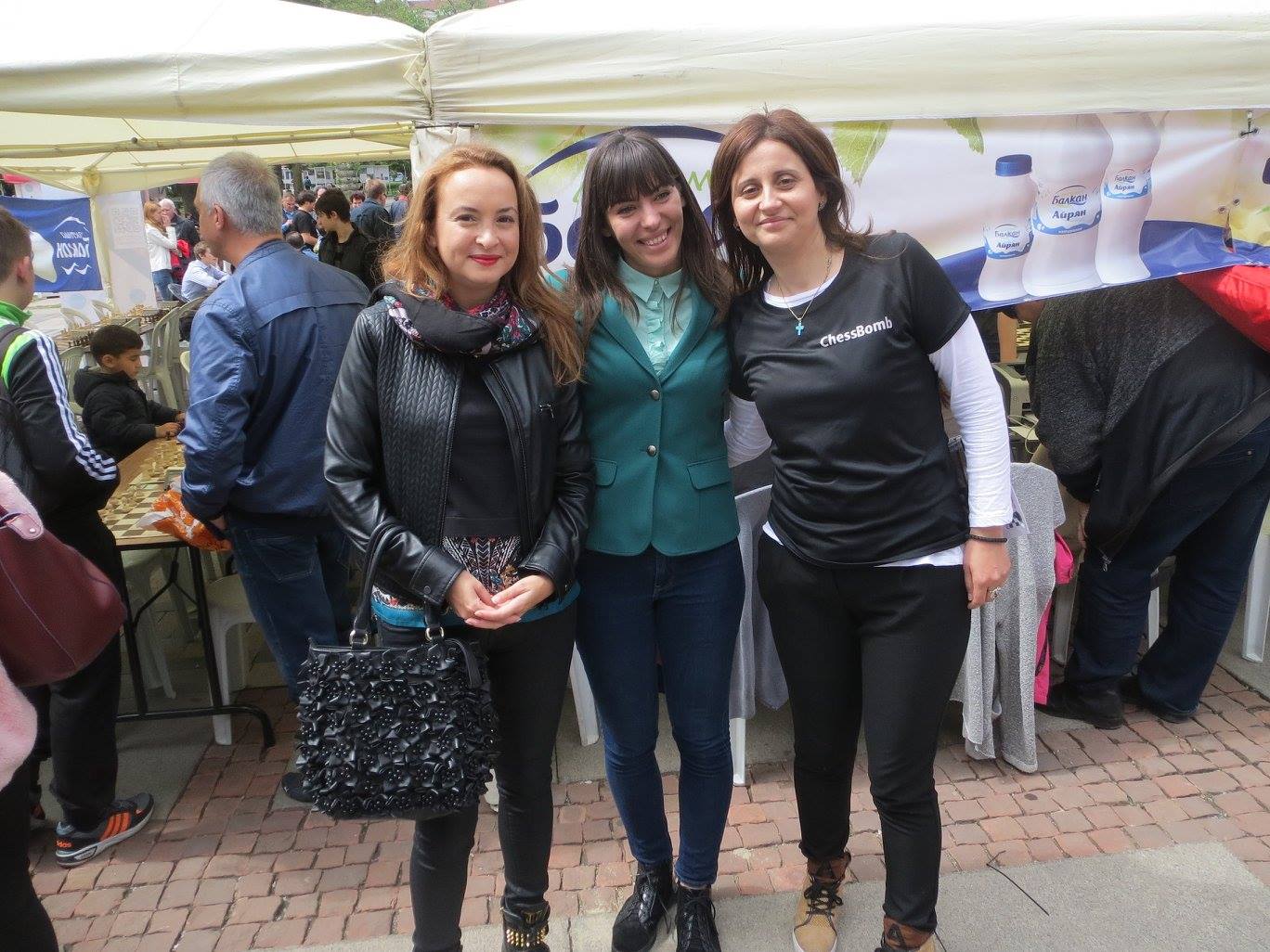 The actor Yordan Danchev and Radoslav Atanassov, chess assistant from the National Sports Academy, constantly commented on the games and entertained the participants. Because of the forecast the organizers had provided tents to hide participants and audiences from the expected rainfall, but the weather was favorable and the rain stopped watching the chess parties. 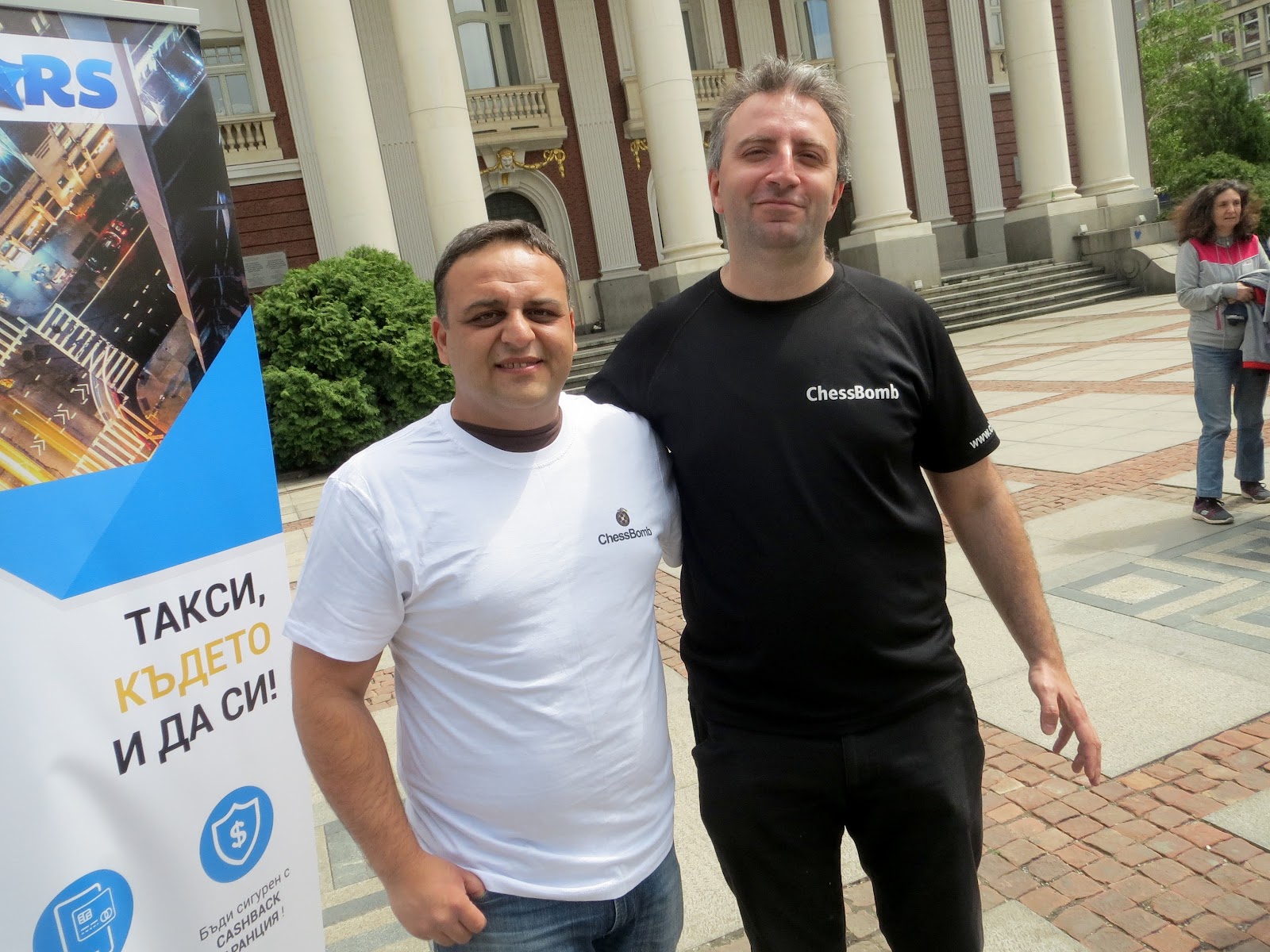 In the three tournaments of the Chess Festival: A - professionals (chess rating over 2100), B - amateurs (chess rating under 2200) and B - children (up to 16 years) took part almost 150 players from all ages. Many guests parents, coaches and chess fans watched the show and had fun. The Chess Race was held in 9 rounds on a Swiss system with 5 minute play control for competitor, with 3 seconds added.
Thanks to the sponsors - "Waffle Heli", "Lakima Balkan" and "Bachkovo" the participants were supported with mineral water and treats. 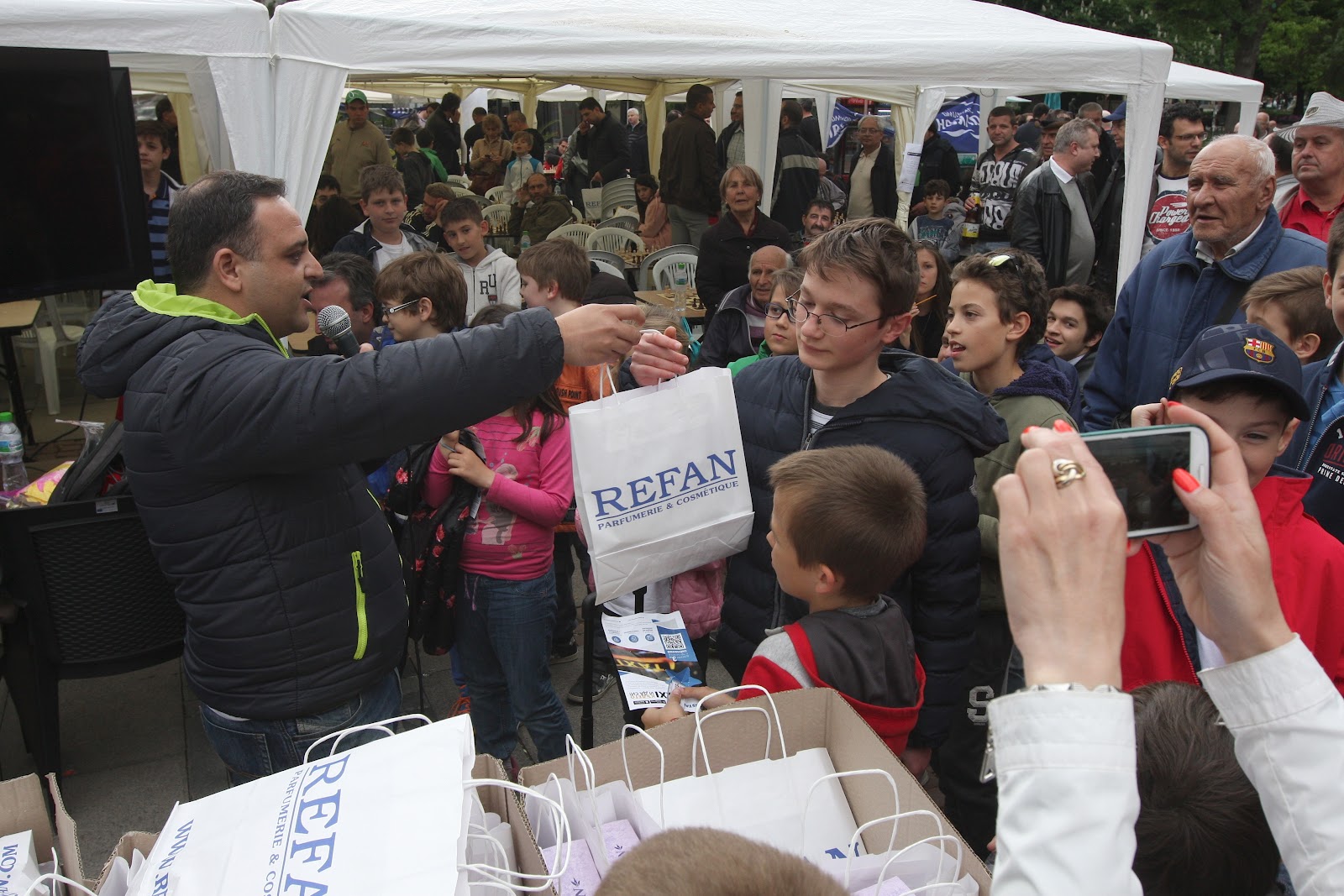 In the breaks between the games was organised a funny lottery in wich the cosmetic company "Refan" presented gift sets. The Dance Ensemble Horce delighted the smallest participants with promotional souvenirs and dance vouchers. The Sofia taxi company "Taxi star" donated to all participants free trips. 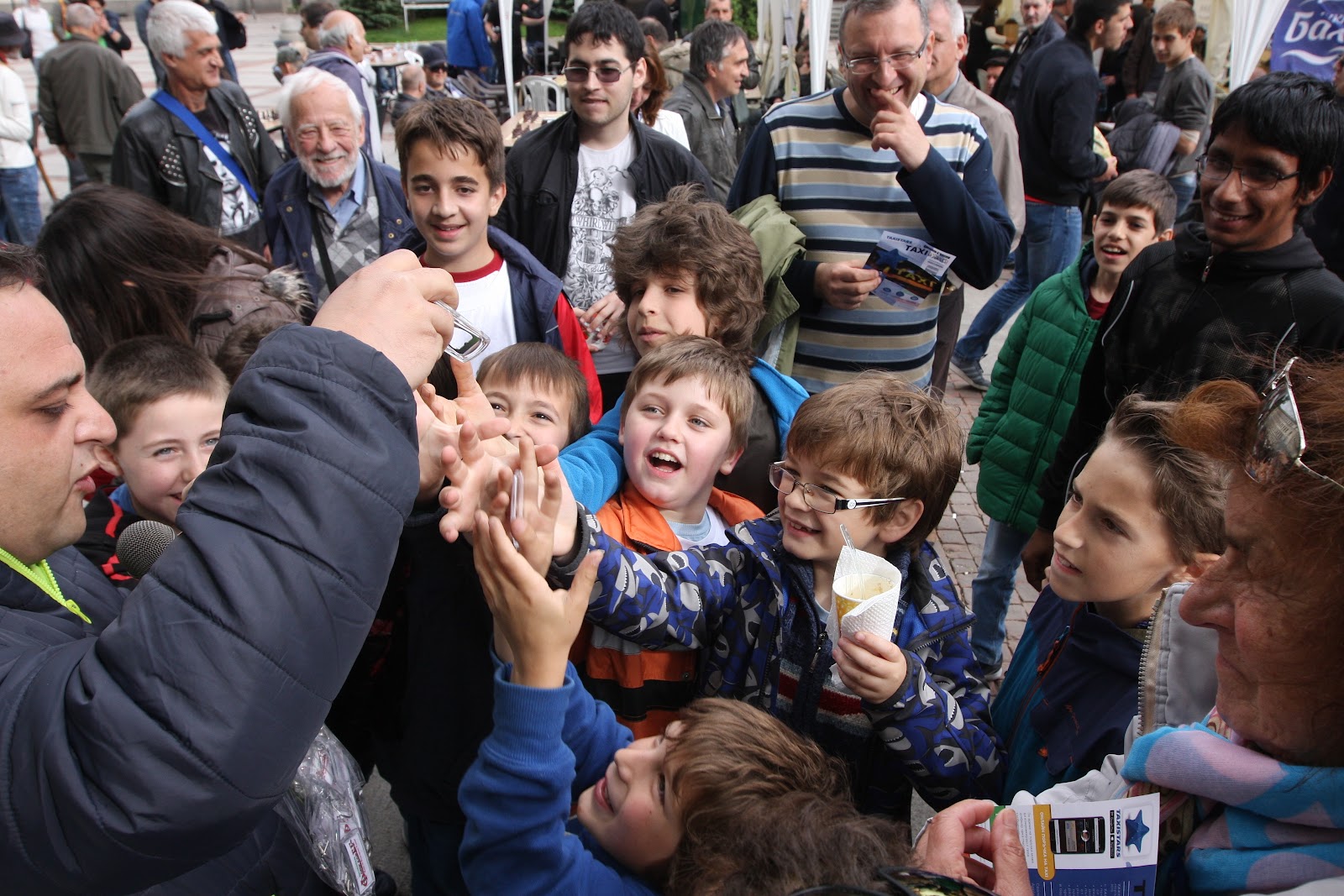 The love of chess and the goodwill was dominant during the whole event. The chess players and judges received support from the participants in the parallel chess tournament on standard chess - The Chess Festival of the Generations - Sredets Cup.
The grandmasters' tournaments in group A were the most interesting and attractive to the public. 22 chess players took part in it. MM Radoslav Dimitrov won the tournament. GM Kiril Georgiev ranked second and third became GM Delchev. A special prize for a seinior won GM Peter Velikov, and a prize for a for 20 years participant won Vladimir Sergeyev Petrov. 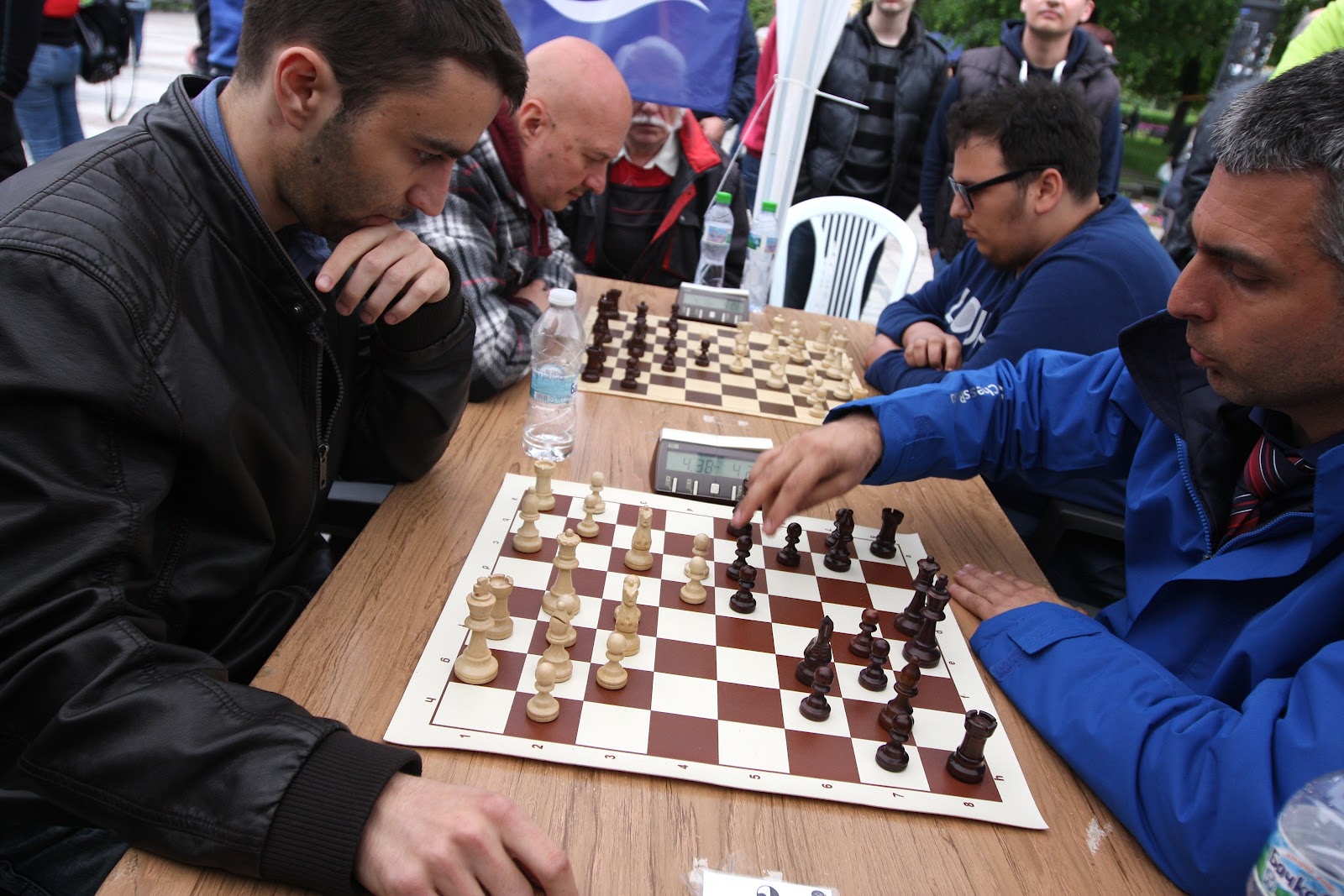 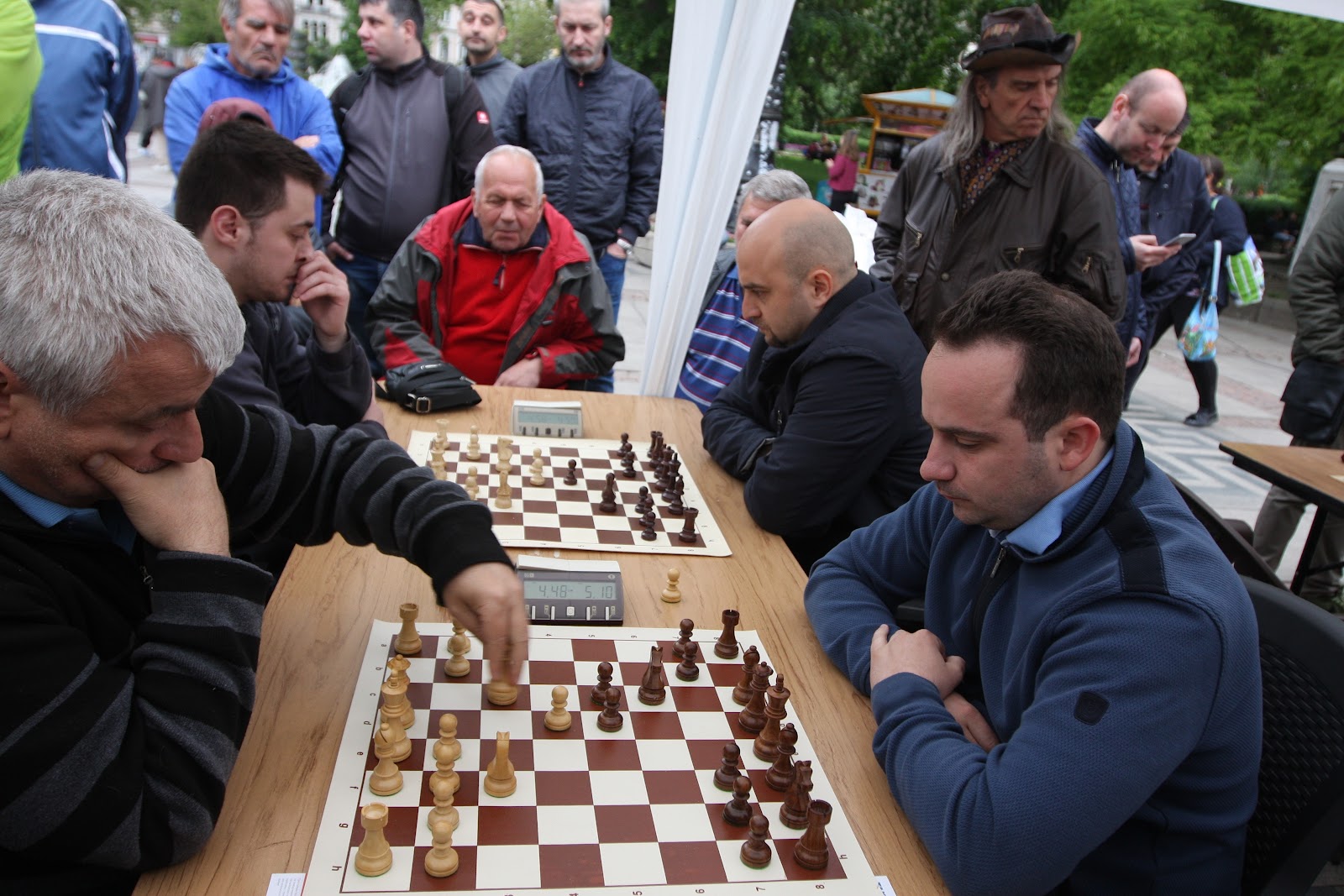 The most numerous group was B - the amateur tournament in which 72 chess players took part. 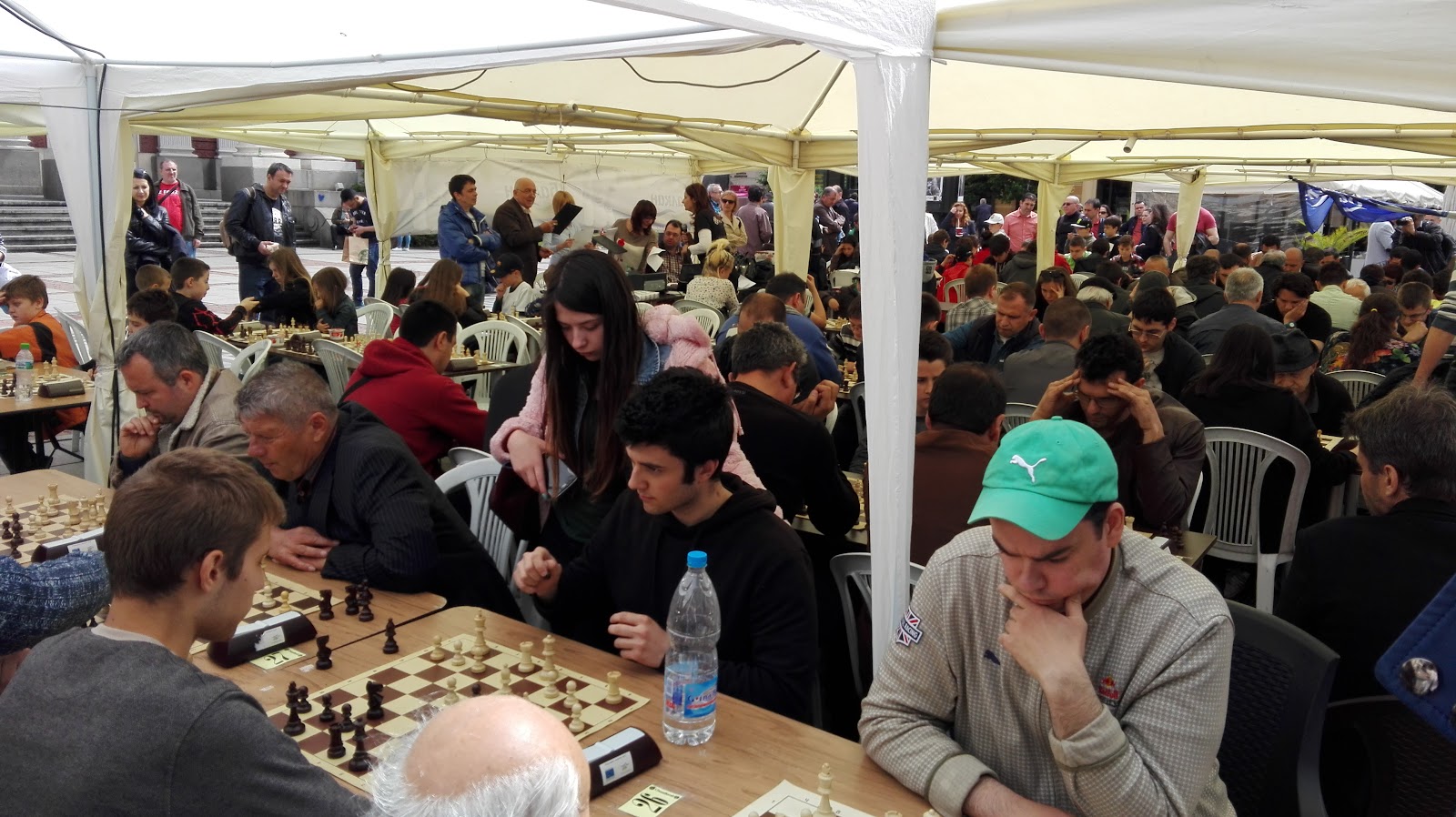 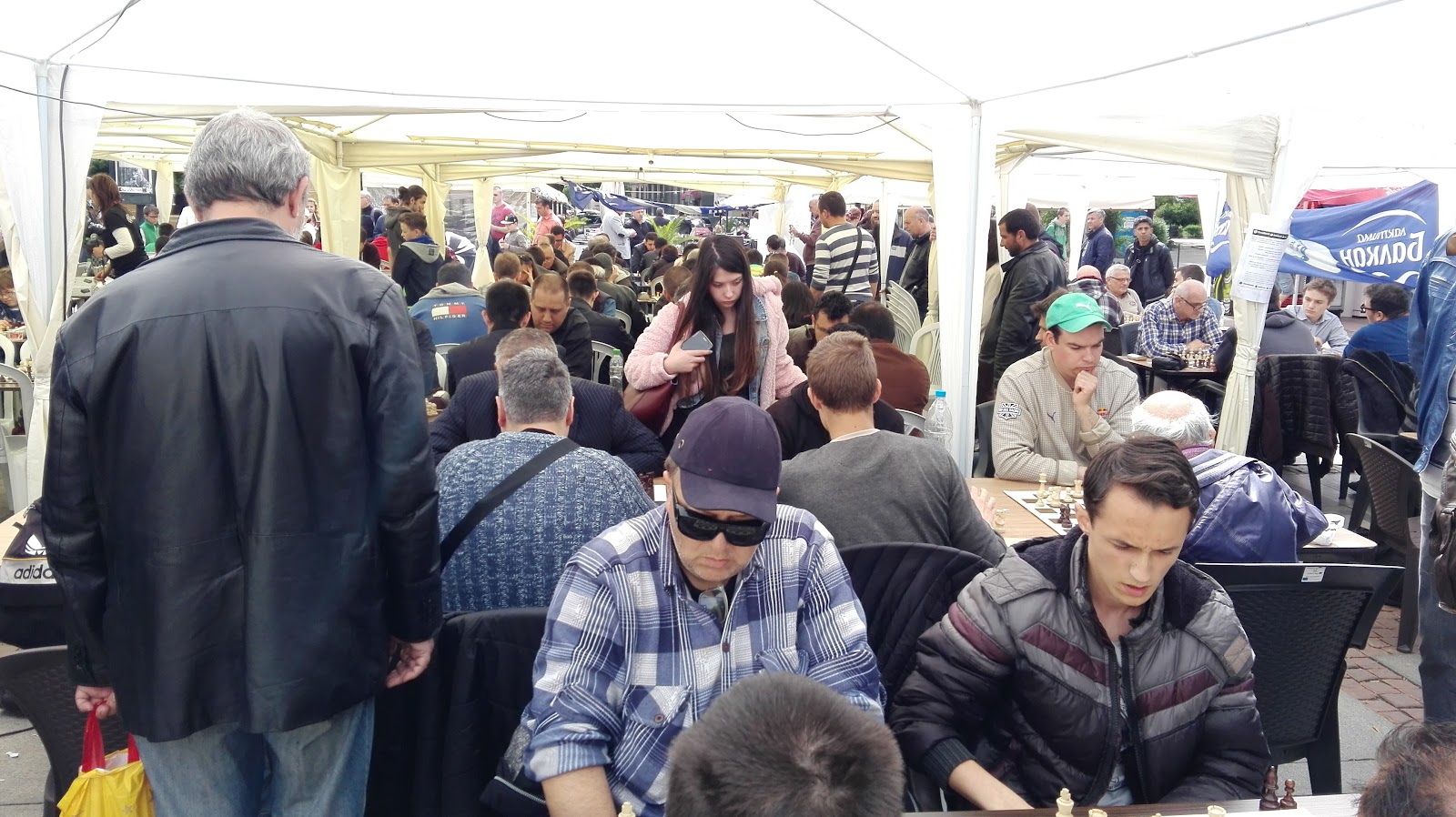 The winner was MM Martin Petrov and the second place won Rossen Ilchov. The third place took Goran Krastev and the fourth was for Tsetsko Todorov. Emil Ivanov recieved the special prize "Senior". Prize received the "daoyen" in the garden - the 82-years-old Lazar Tsvetkov.
The first prize among women was won by Gabriela Antova and the second winner was Victoria Bukkeeva. First prize for chess players with a rating less than 1800 won Nikolay Cholakov. The second prize in this category was for Kaloyan Todorov.
In the most emotional group - Tournament B for children up to 16 years participated in 49 players. 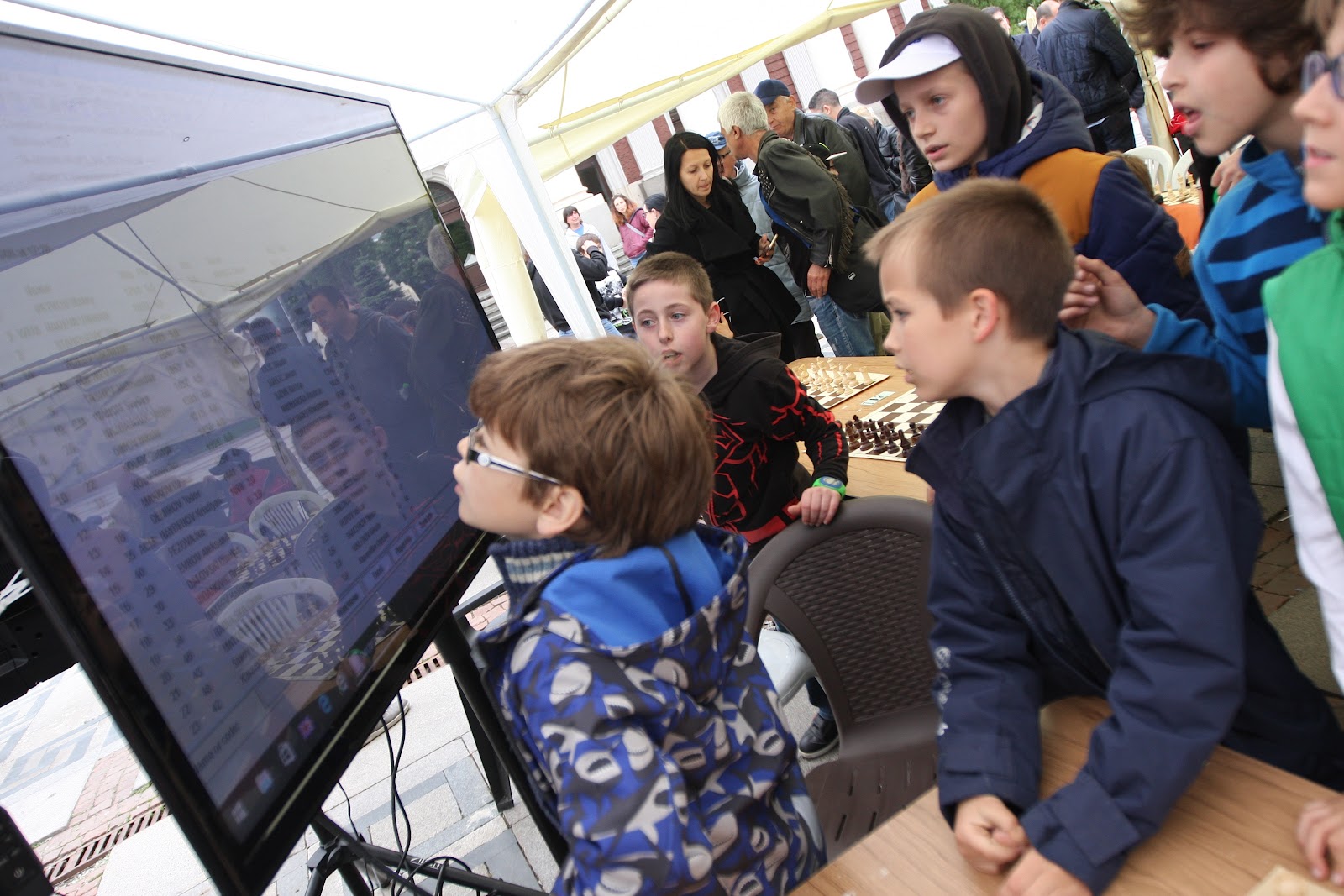 Convincingly, with 8 points, Matthew Petkov took the big prize - a laptop. The second place and a smartphone won the 14-year-old Stoyan Orlinov Stoyanov with 7 points. The third place took the Plovdiv star and a multiple champion of Bulgaria - Victoria Radeva. 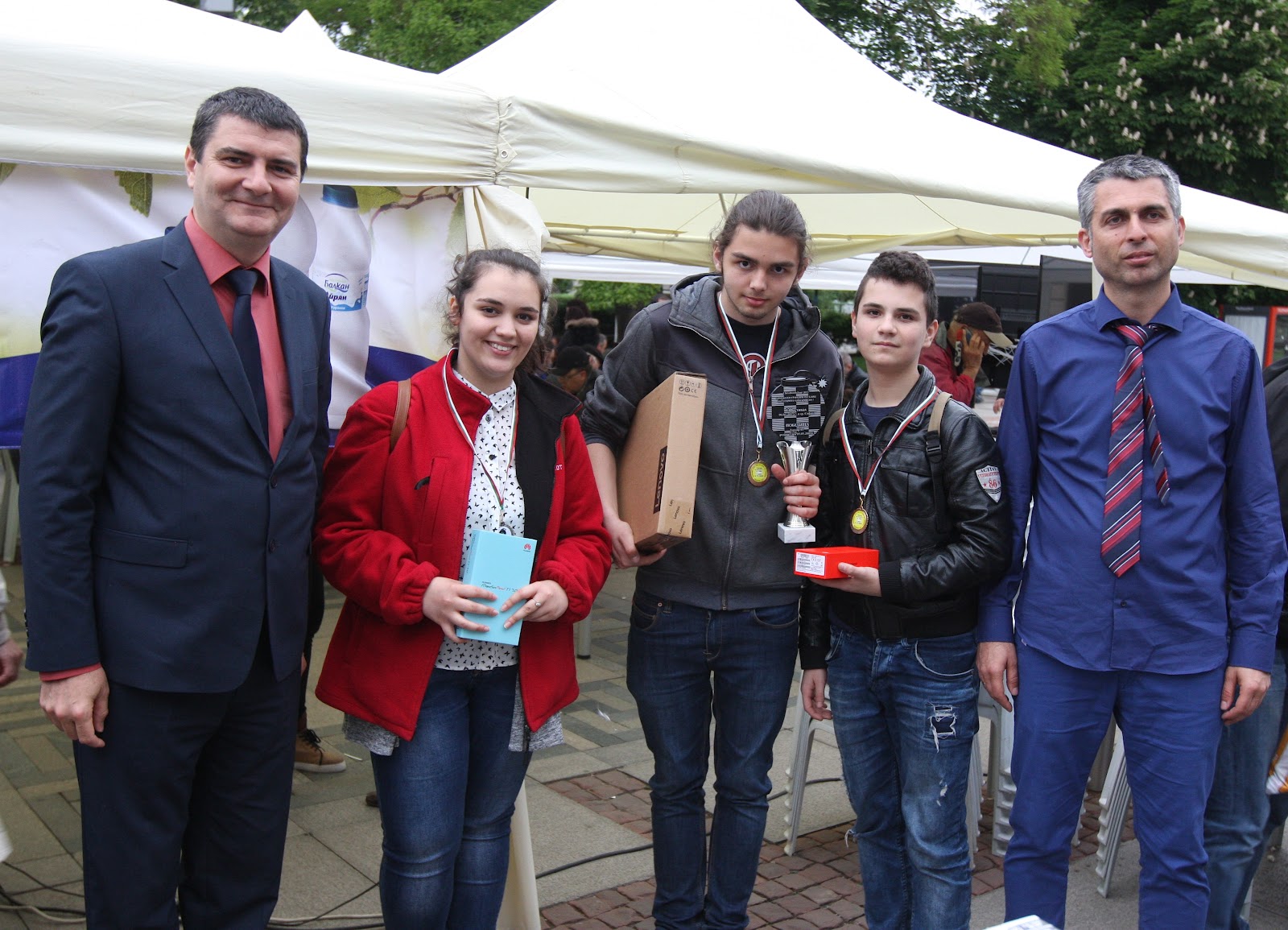 The chess player with best performance in the group to14 years was Elif Mehmed , Lachezar Kolev became first in the group to 12 years. In the group up to 10 years Svetlin Ivanov won with 5.5 points. All young chess players were awarded. They choose their prizes from an improvised gift bazaar. The pleasant surprises left everyone happy. 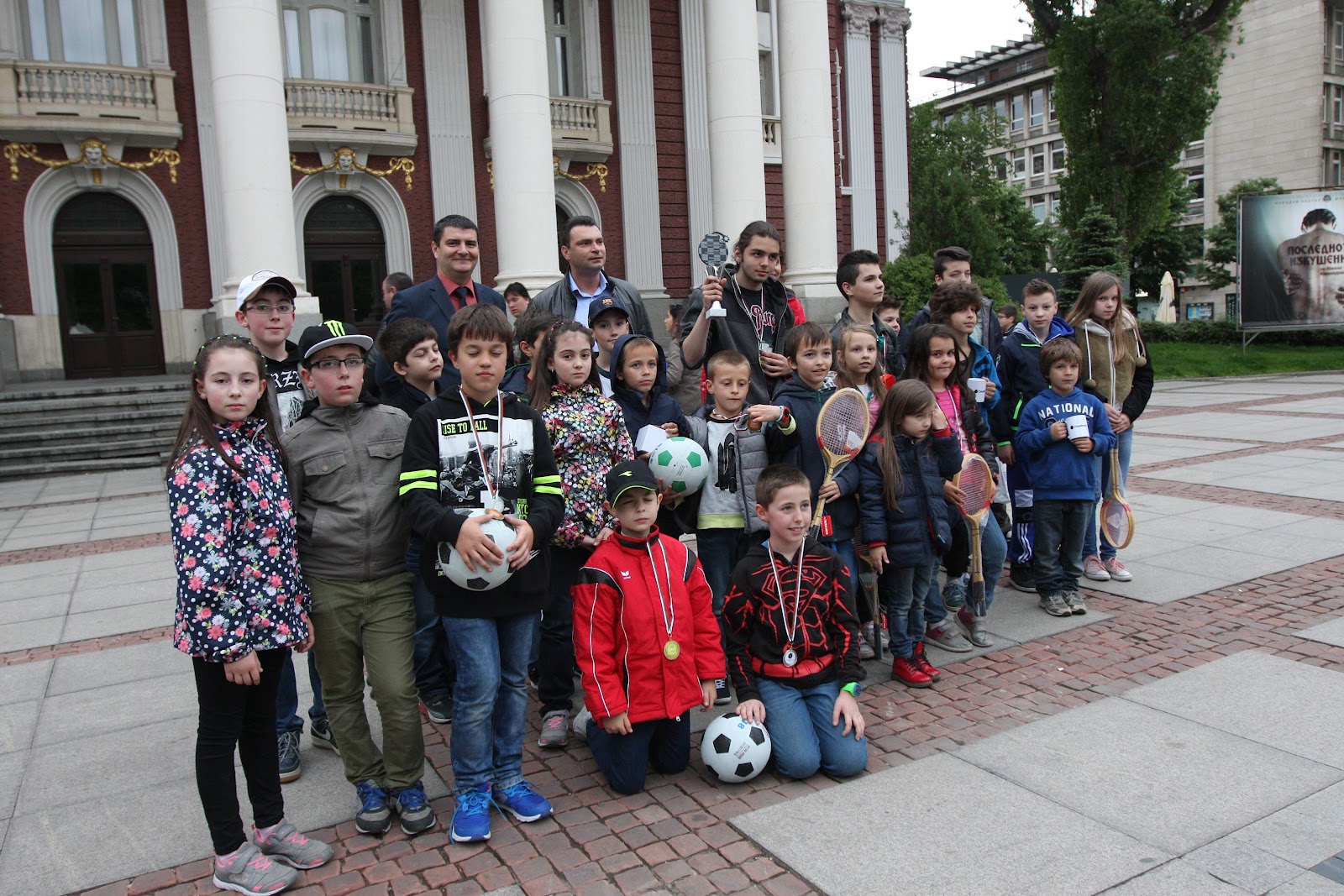 The prize fund was impressive for a competition of such type - 6000 leva. The tournament was realized thanks to the Municipality of Sofia and the main sponsor - the international ChessBomb.com chess portal. 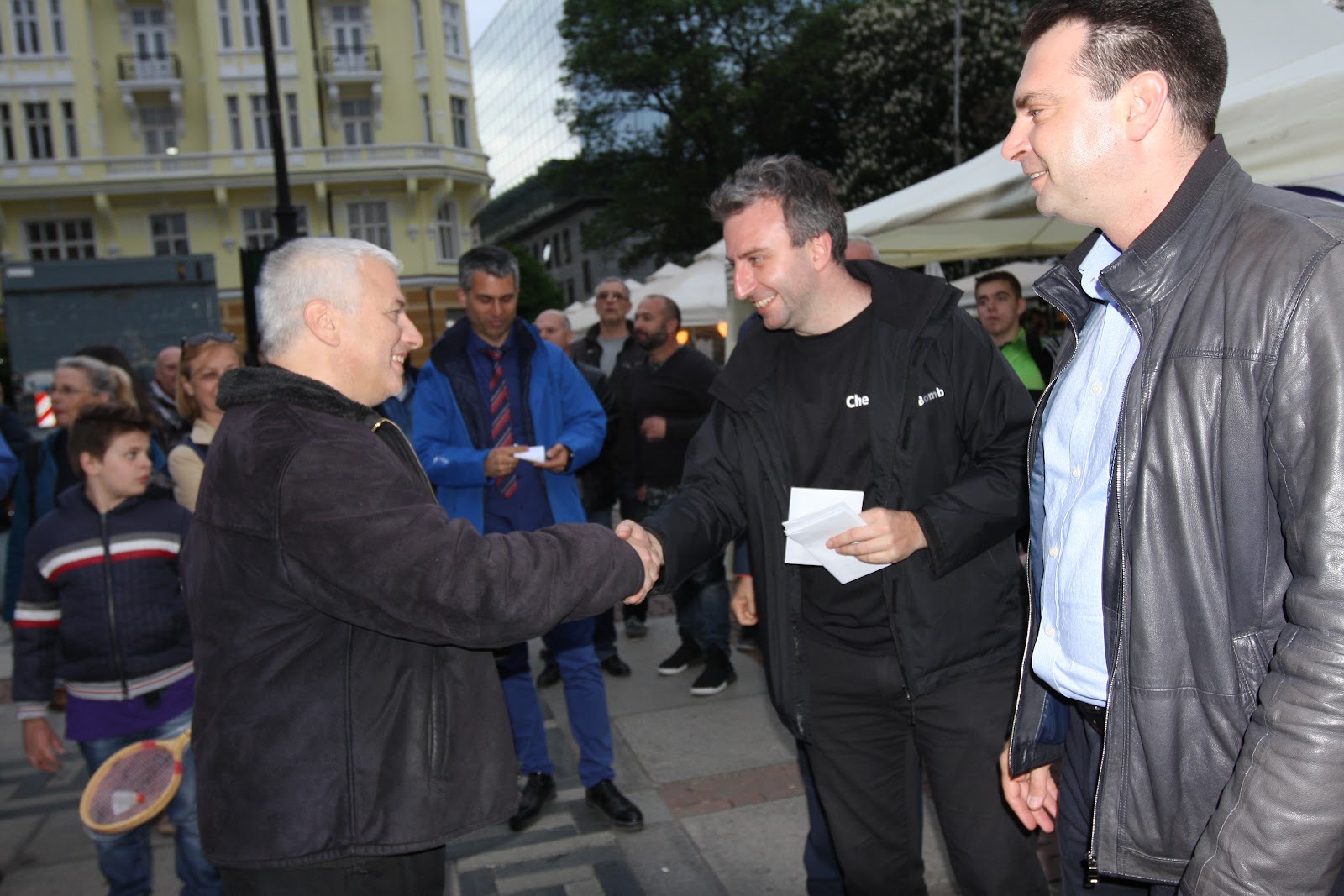 You can see more detailed results on http://www.chess-results.com/ and a event record on https://www.youtube.com/watch?v=ia_nVK_NM9Y= In the final tournament, which will be held in Plovdiv during September, Radoslav Dimitrov, Kiril Georgiev, Alexander Delchev, Martin Petrov and Matthew Petkov will continue. They will be able to fight with ten of the best players in the world chess elite. The next tournament of the chain will be held on 03.06.2017 in Plovdiv, in Tsar Simeonovata gradina. After that battles are moving to the sea: Varna - 1st of July and Burgas - 5th of August 2017.
Posted at 1:47 PM