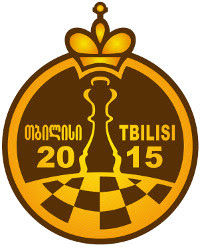 The third stage of the FIDE Grand Prix series 2014-2015 was officially inaugurated in the presence of the players, FIDE CEO Geoffrey Borg, President of the Georgian Chess Federation Giorgi Giorgadze, Chairman of the Appeals Committee Nona Gaprindashvili and Chief Arbiter Faik Gasanov.

The Grand Prix is taking place in Tbilisi (Georgia) from the 14th until 27th of February 2015. The organizers of the tournament are the Georgian Chess Federation, the Ministry of Sport and Youth of Georgia and Tbilisi City Hall. SOCAR Energy Georgia is the general sponsor of the event.

Chief Arbiter announced the round one pairings as follows: